Today we said “au revoir” to the beautiful city of Nice and the sparkling French Riviera. There’s no question everyone enjoyed the four days here to the max!

We began our stay with a logical choice … lunch on the beach. When my partner in leading this tour, Susan Sommers, arrived with the group after their flight from Toronto, I was waiting to greet them in the lobby of Hotel Beau Rivage. It’s one of the best in town, with a superb location: the old town and daily market, with an abundance of shops and restaurants down the street one way and the sea the other. 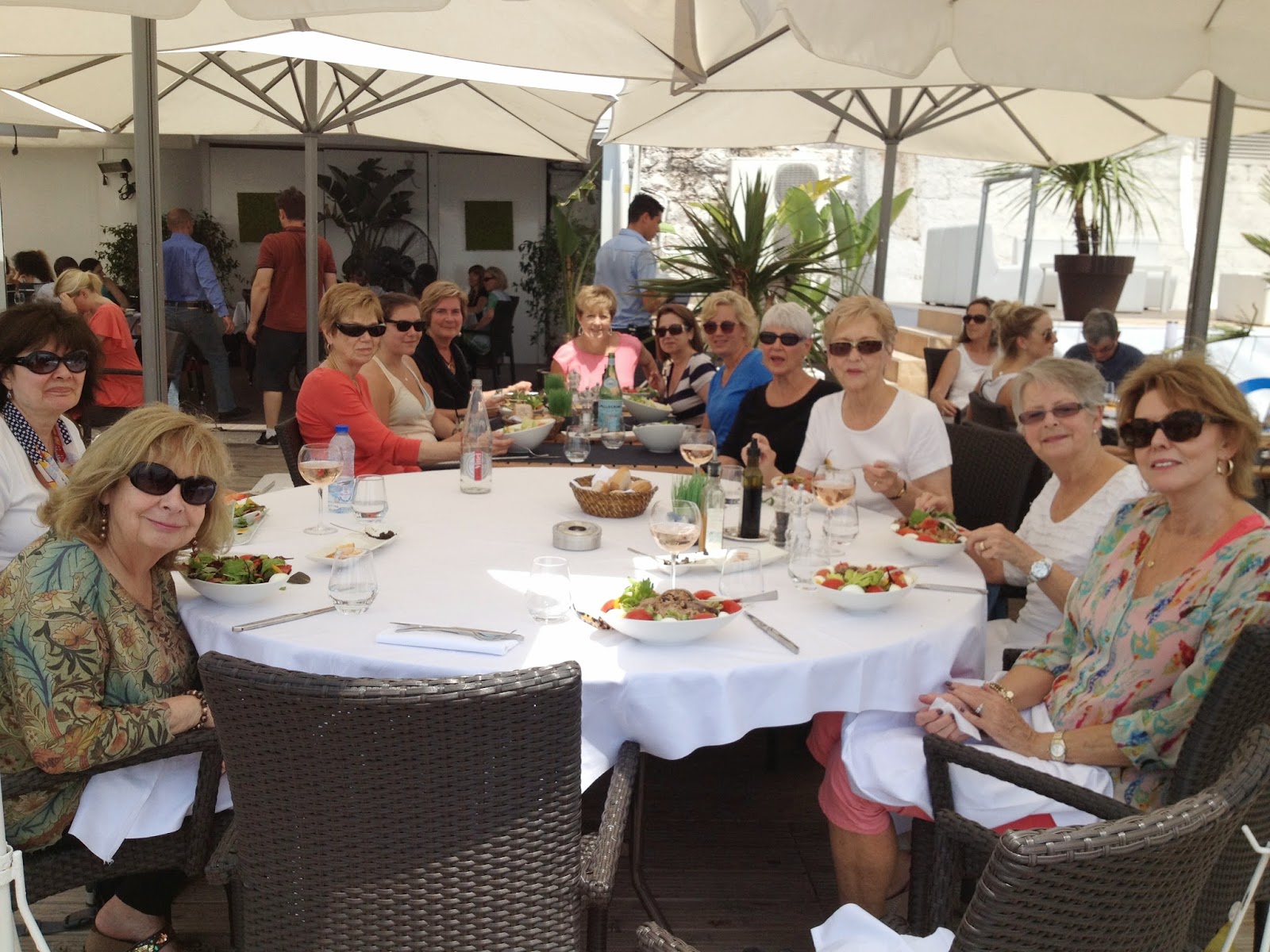 Luggage safely stored by the incredibly helpful staff, we simply walked across the Promenade des Anglais, where a table for ten awaited us at their beach restaurant. Needless to say, there were several moments spent stopped on “La Prom” (as the locals call it) with cameras out and exclamations of pleasure at the stunning view surrounding us. 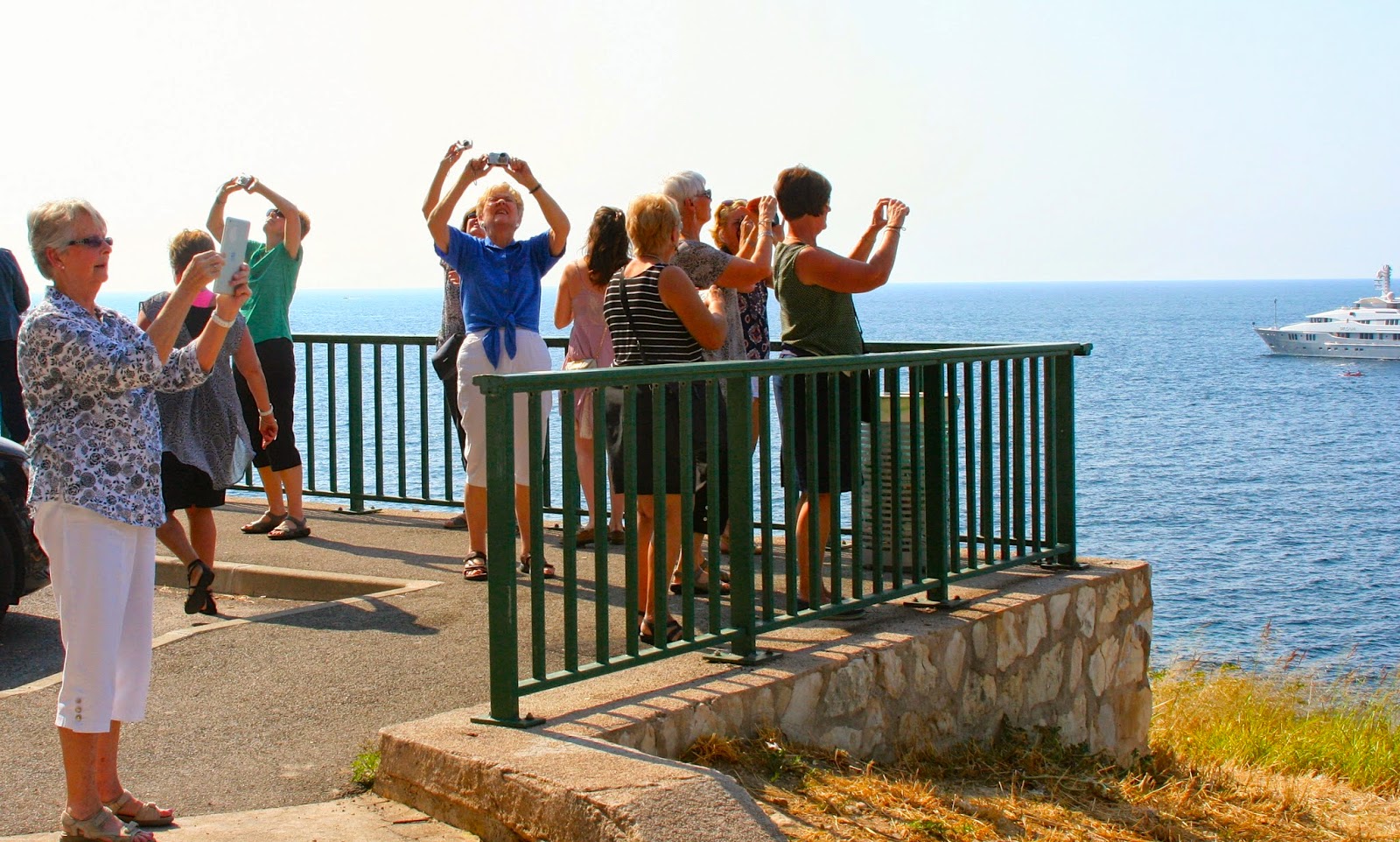 The remaining two members of the group arrived from Paris a few hours later. It could not have been a better beginning as we overlooked the sparkling turquoise waters of the Mediterranean, shaded from the warm sun, and sipped this summer’s popular cooler “Rosé Piscine” ~ rosé wine served over ice cubes in a large, balloon-shaped wine glass.

After a relaxing and delicious lunch, we checked into our rooms and had a few hours at leisure. Some of the women went for a stroll around the area with Susan and me, while others had a rest after their long flight. Still others spent the time having a dip in the Med and a snooze on a lounge chair on the pebble beach.


Our evening began with a very special visit with Ted Jones, author of The French Riviera: A Literary Guide For Travellers. We met in a bar down the street from our hotel with a stunning view over the Mediterranean. In spite of traffic noise through the open patio doors, he kept us in rapt attention with his tales of authors who lived on the Riviera through hundreds of years.

Dinner that evening was at a long table, in the atmospheric surroundings of the ancient buildings and squares of the old town. Needless to say, strains of accordion music reached our ears from time to time and the e n o r m o u s Fenocchio ice cream stand just up the street in Place Rosetti did not escape anyone’s attention!

Day 2 began with our outstanding guide, Corinna, introducing us to our fine bus driver, Rudolf, and our comfortable twelve-row bus, and we set off for Monaco. Just a half-hour away along the spectacular basse corniche, Rudolf patiently waited as magnificent photo ops appeared in quick succession. Such is the reality of the Côte d’Azur! 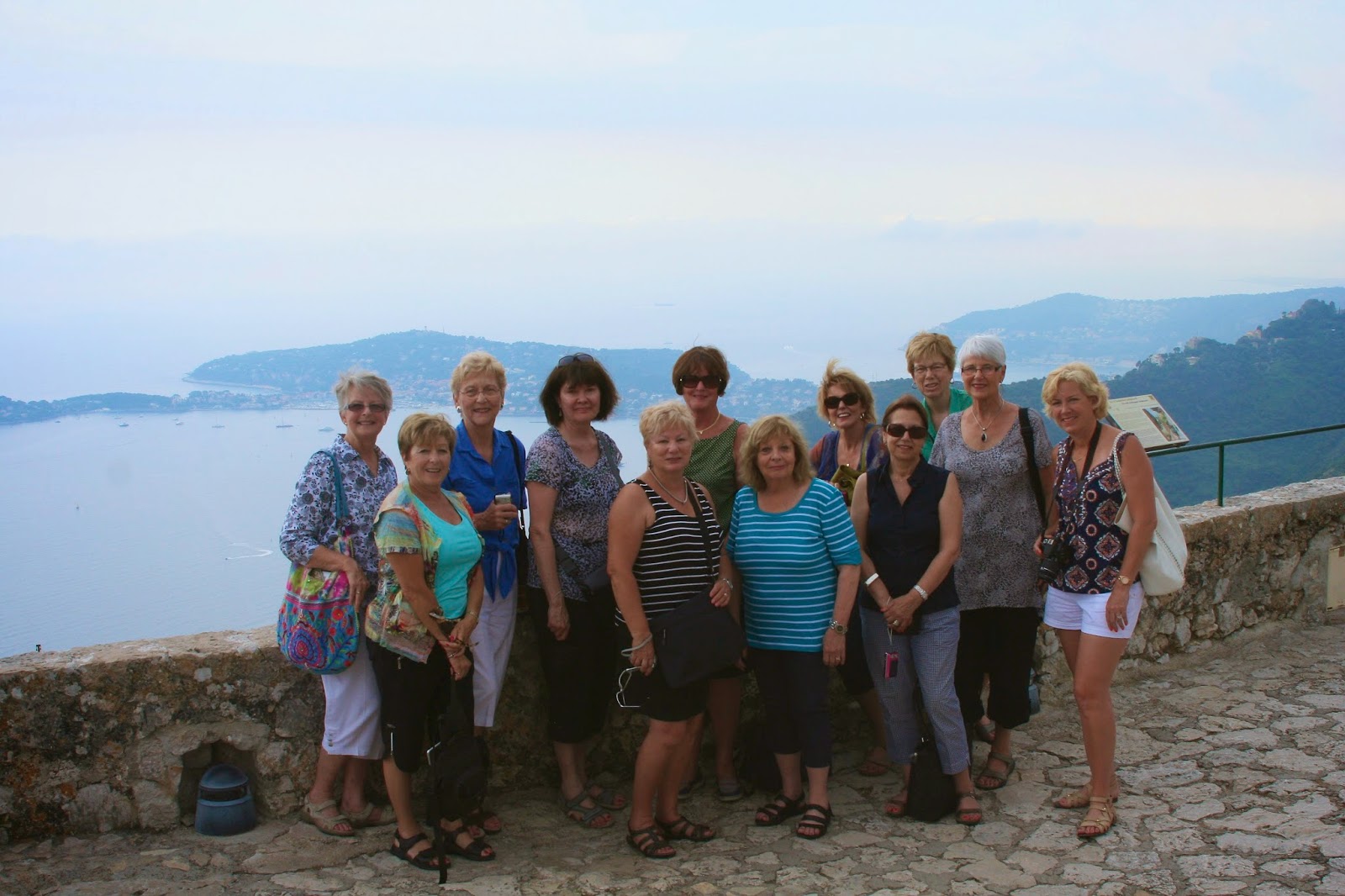 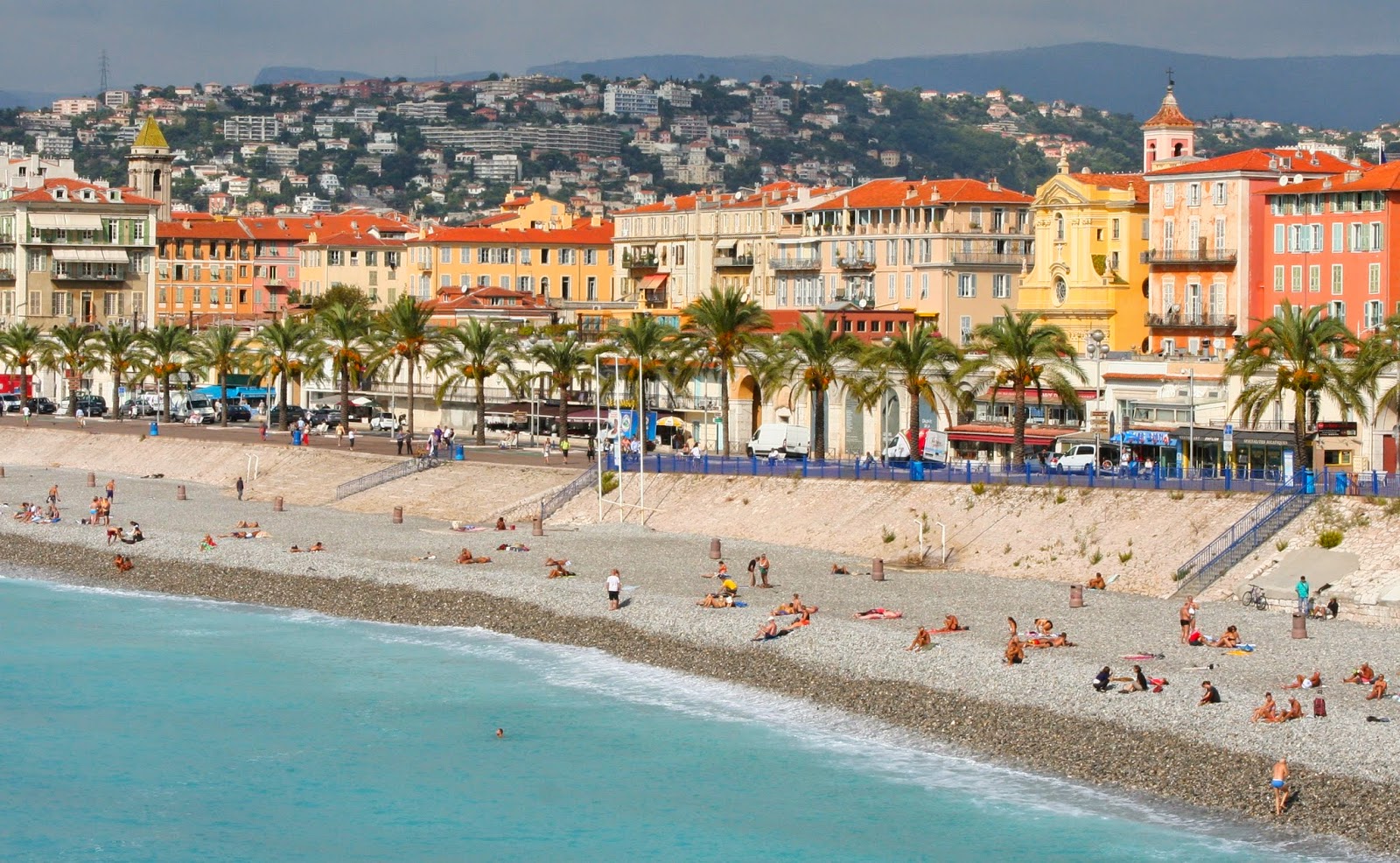 The morning was spent touring the old town of Monaco. Visiting the royal palace, watching the changing of the guard, and checking out shops (including ice cream …) in the meandering, narrow streets filled several hours. After lunch, the bus took us on a breathtaking ride up to the perched 11thC village of Eze. Before anything else, we walked up through the spectacular Jardin Exotique with its vast collection of unique and beautiful cacti and succulents. Between the gardens and the view it was difficult to stop exclaiming!

Our timing could not have been better, as a light rain begin just as we boarded the bus for ‘home’.

Day 3 was a free day with many options. Some of us took the hop-on, hop-off bus, at various times during the day, which gave an excellent overview of the entire town. The Musée Marc Chagall was one of the stops visited by most and well worth the time.
Many explored other areas, shops, palaces, and parks of this beautiful town that is inviting and welcoming for strollers. Oh … and did I mention ice cream? Enthusiastic reports confirmed that a great day was had by all!

Day 4 began with a quick visit to the Monday flea market, just down the street. Then our intrepid driver and guide took us into the hills of the arrière-pays to the perfume centre of Grasse with its rich, five hundred year history. The morning was spent in an excellent tour of the Fragonard perfume factory, still run by three great-grandaughters of the original founders. It was fascinating to walk amongst the tall copper vats and kettles and wooden drying shelves that were originally used for centuries to blend flowers, spices and other exotic ingredients to produce the company’s distinctive fragrances. Today the system is more automated but we were pleasantly surprised to see there remains a certain degree of hands-on involvement. 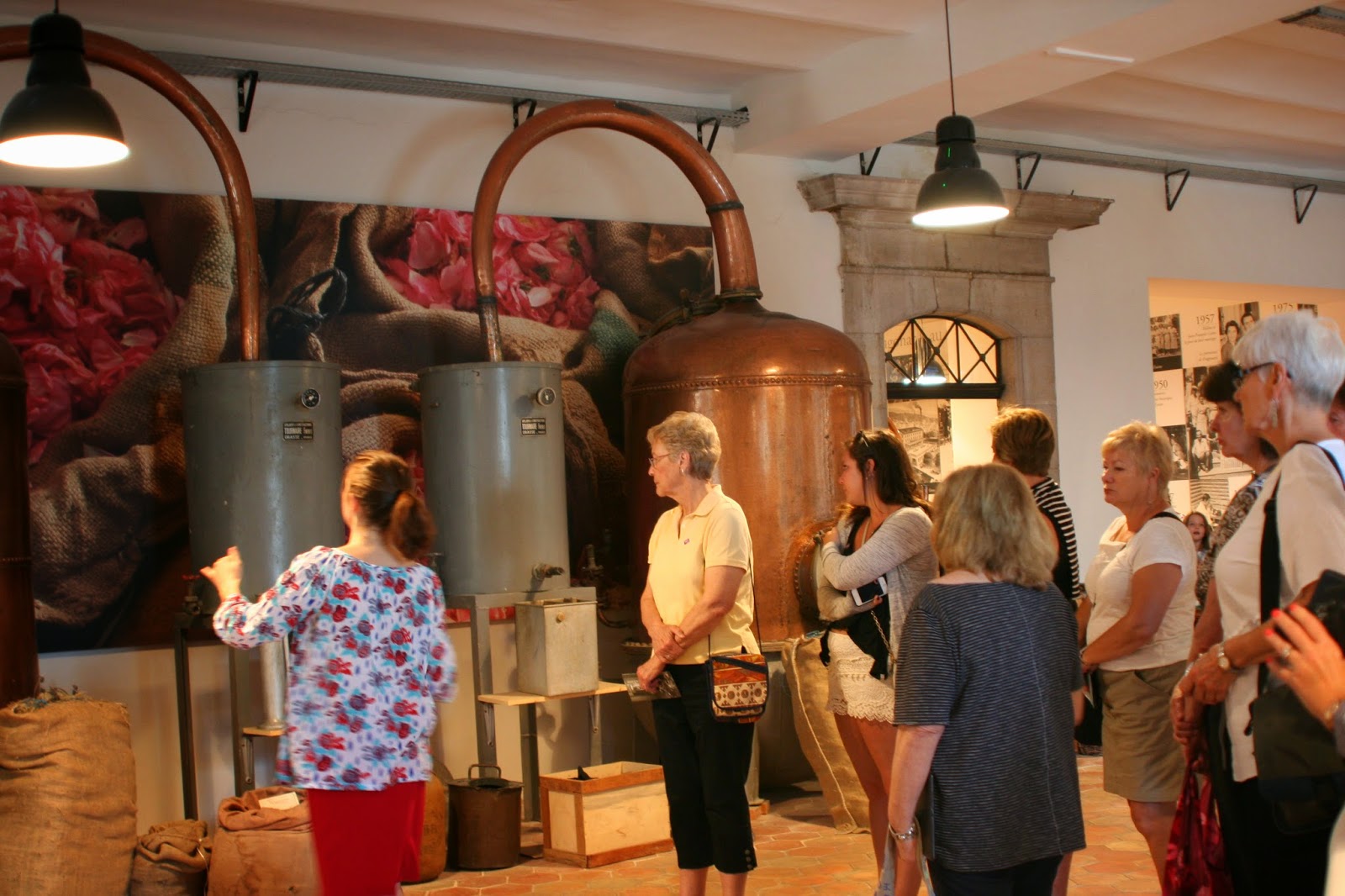 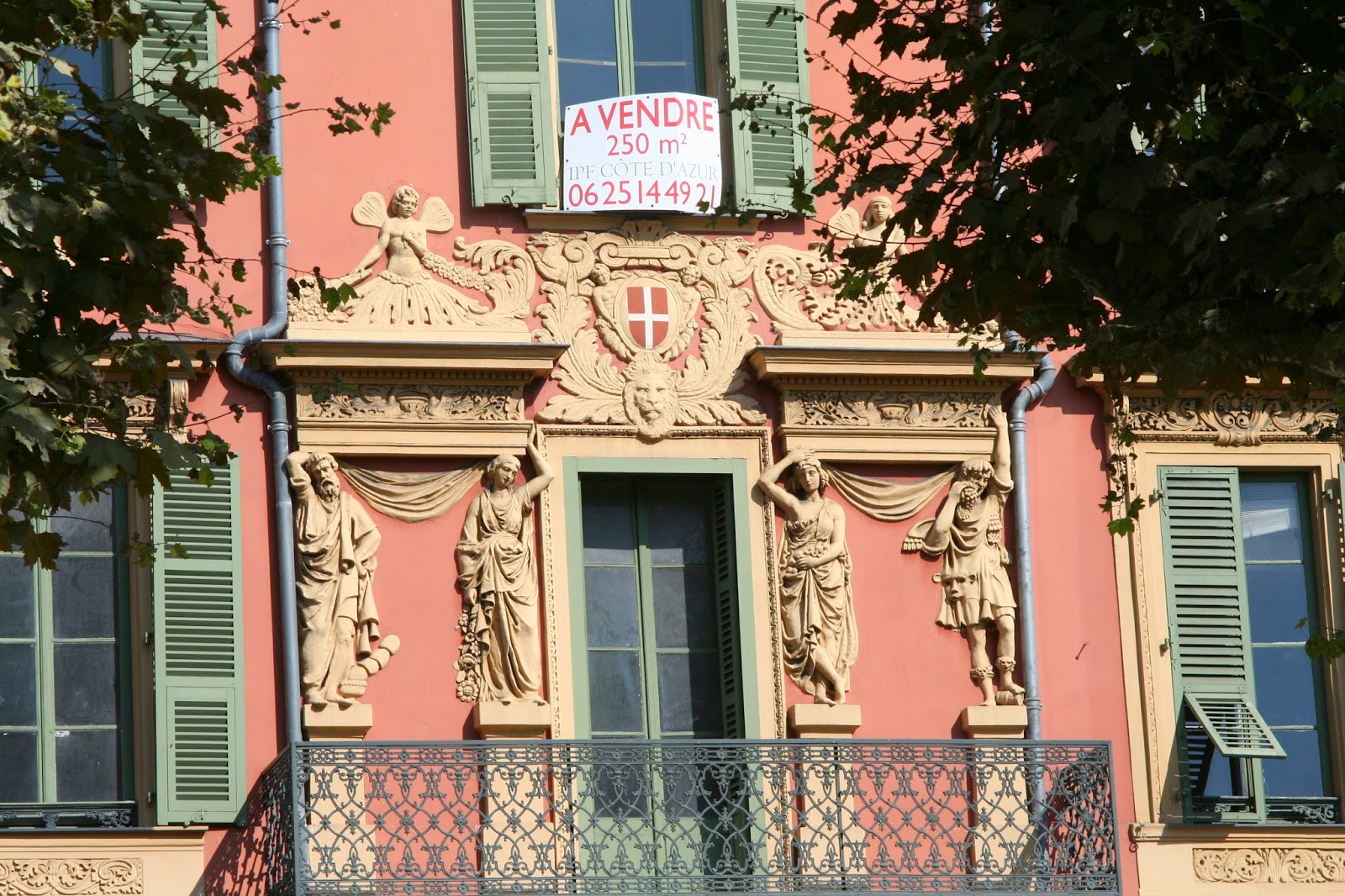 We also learned a great deal as to why certain scents are used and how they are combined. There were opportunities to experience products and, of course, spend a little time browsing and buying in their stunning shop. Everyone loved it!

We were back on the bus for a winding and picturesque route through forests and past villages perched high on cliff tops, until we came around a corner that took our breath away!  The first view of the village of Tourrettes-Sur-Loup never fails to draw gasps. The jumble of the ancient stone structures hanging off the side of the hill demands a photo and Rudolf managed to find a spot to stop, to great applause!

Arriving at our destination of Saint Paul-de-Vence was equally as breathtaking. Our guide, Corinna, had given us a great deal of history (and love stories) about the area during the drive. We were left to discover some of the lovely restaurants for lunch and few of us were introduced to the joys of café gourmand ~ a tasty sampling of patisseries (without guilt!). More time was spent later exploring the narrow, cobblestone lanes, as well as admiring (and photographing, yet again) the stunning view across the hills, right down to the coast. 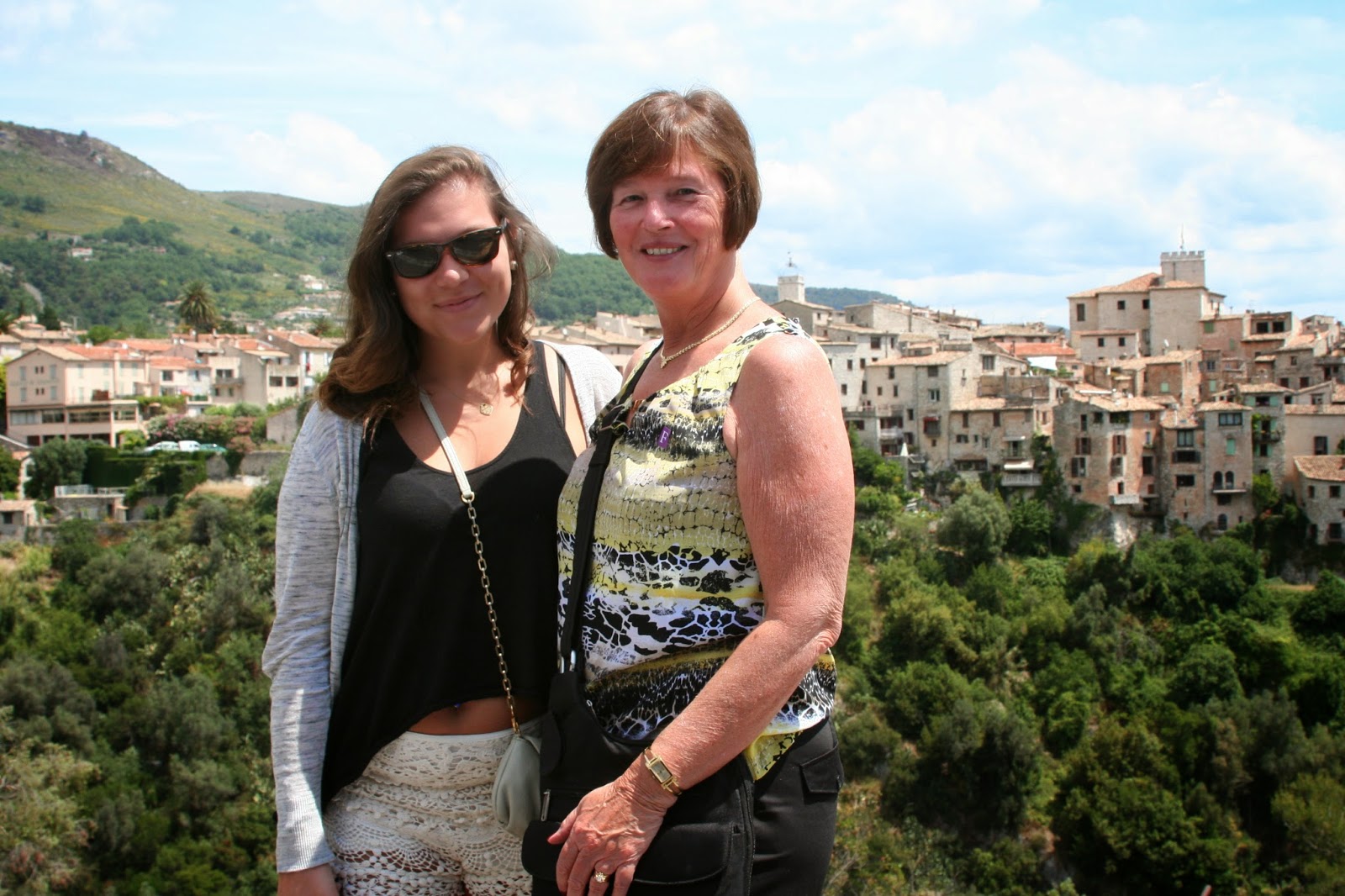 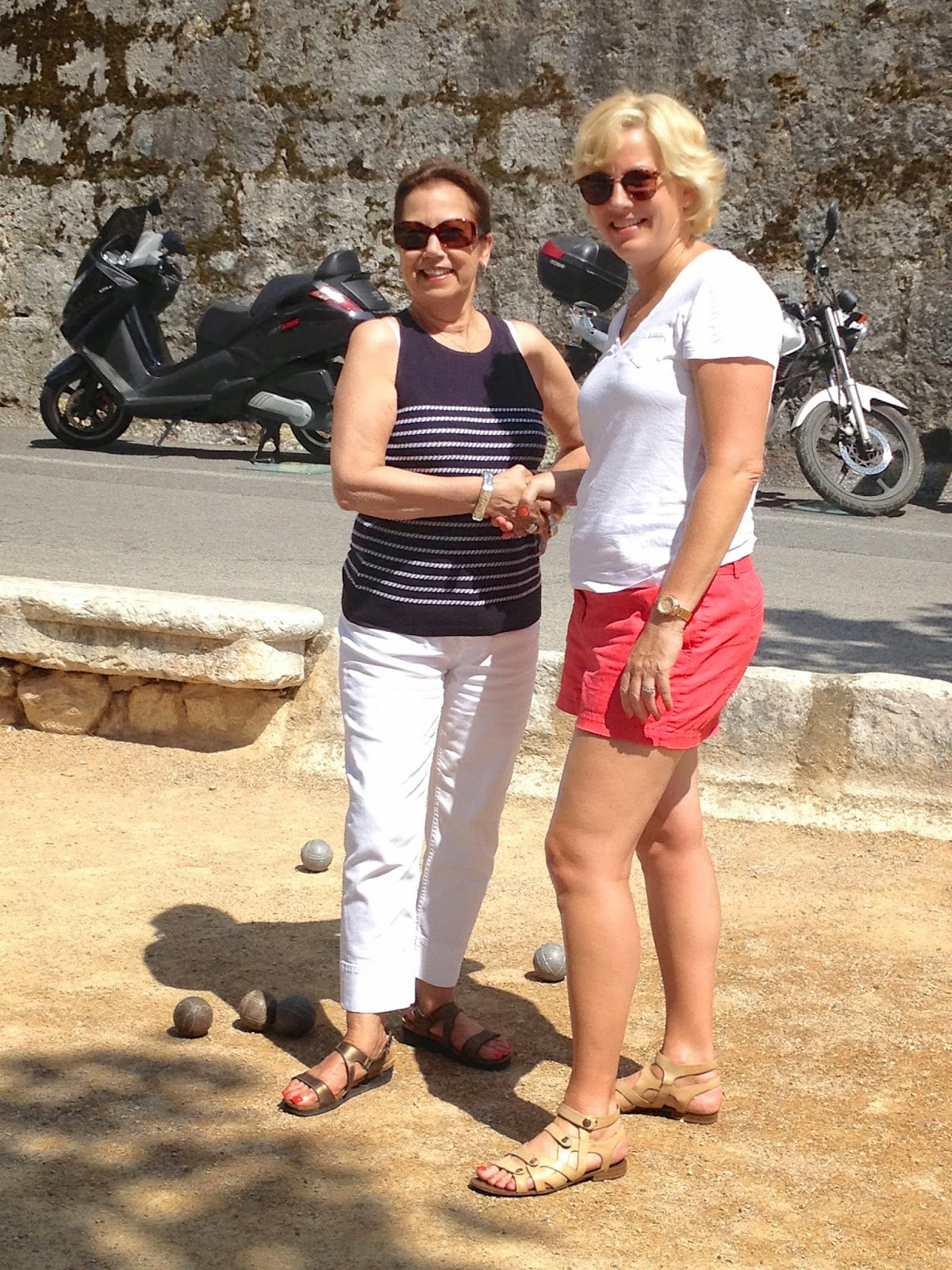 To add to the fun, Corinna, arranged to borrow a set of boules from the Café de la Place and then instructed us in the fine art of the game of boules. That particular boules pitch, shaded by massive plane trees, is one of the most famous in France. Yves Montand, along with other celebrities living in the area, played here regularly. After a tense finale between Yvette and Heather, Corinna declared Heather the winner of the very close match! 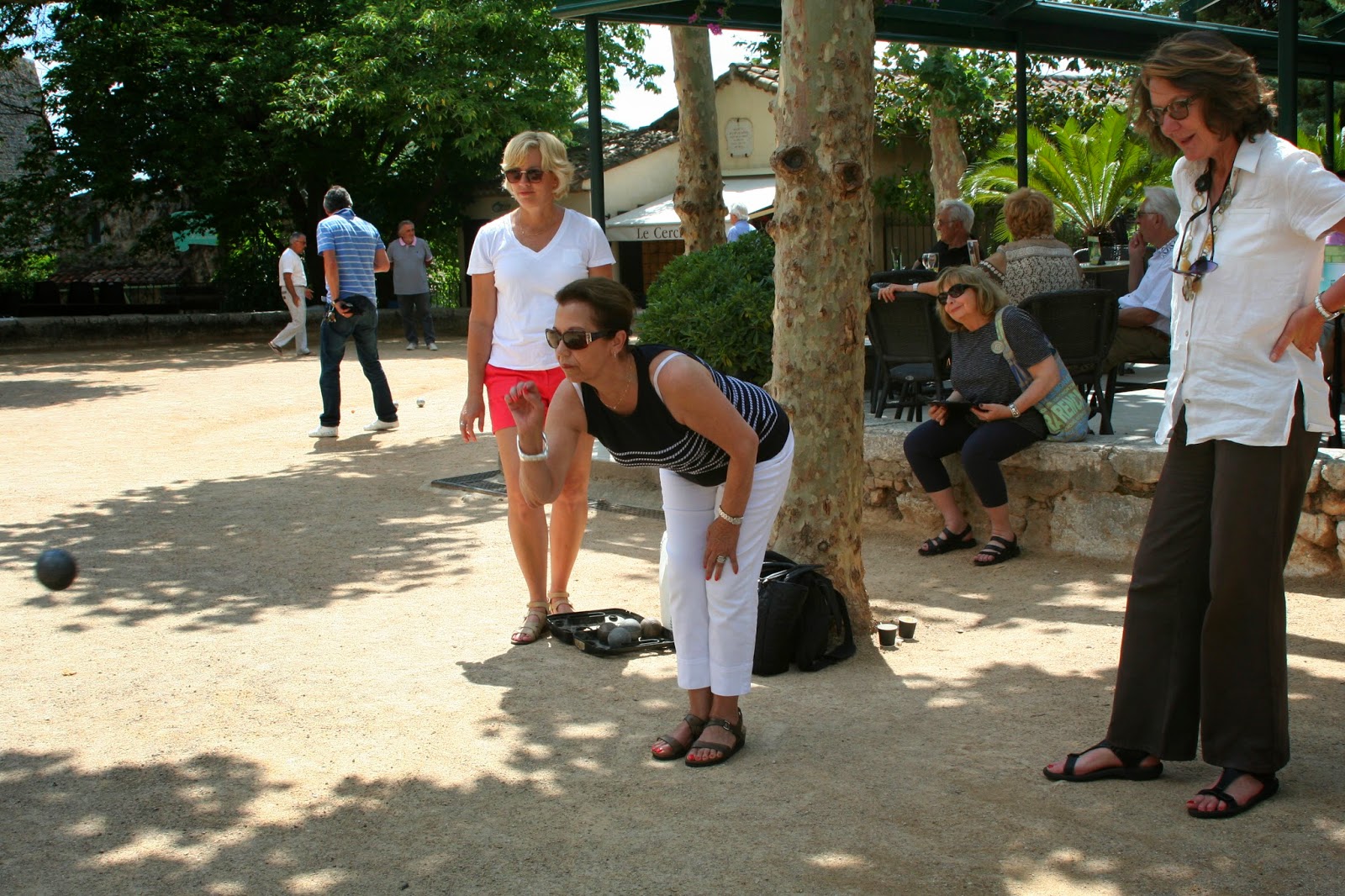 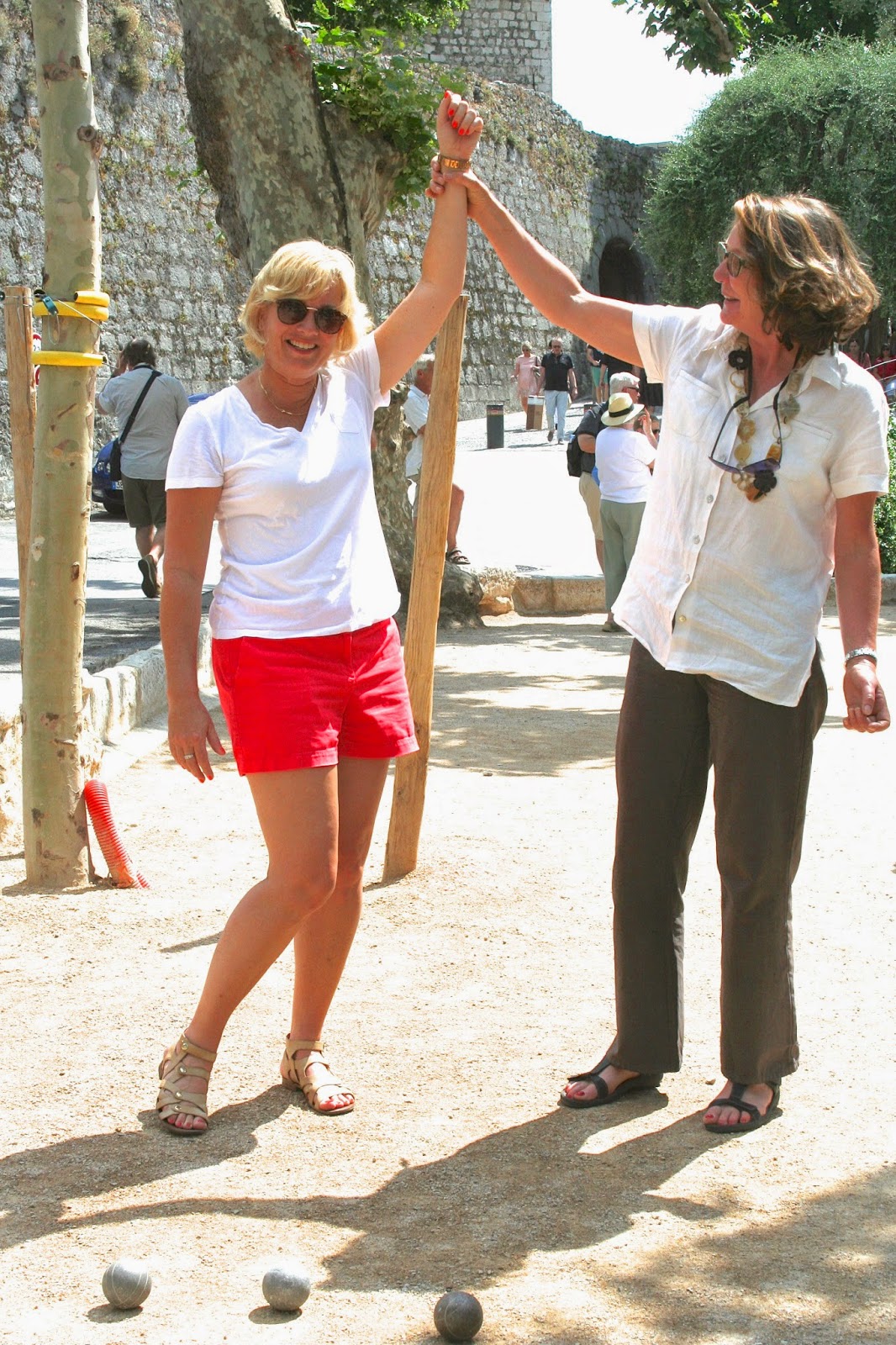 Our final dinner was once again in the old town and began with chef’s creation of a smoked salmon entrée with a crème brûlée topping … unique and delicious!  The meal was accompanied by toasts to the success of our visit of Nice La Belle and Heather’s Boule championship!

Tomorrow we leave for an afternoon in Aix en Provence before settling into our hotel in Avignon. We’re excited to begin our explorations in the provençal countryside.

After leaving Nice by private coach, we reached Aix-en-Provence in time for a guided walk, lunch, and some browsing time before going on to our hotel in Avignon. This would be our home for the next 5 nights, perfectly located just steps from the magnificent Palais des Papes and the Pont Benezet, the Avignon bridge of childhood song. 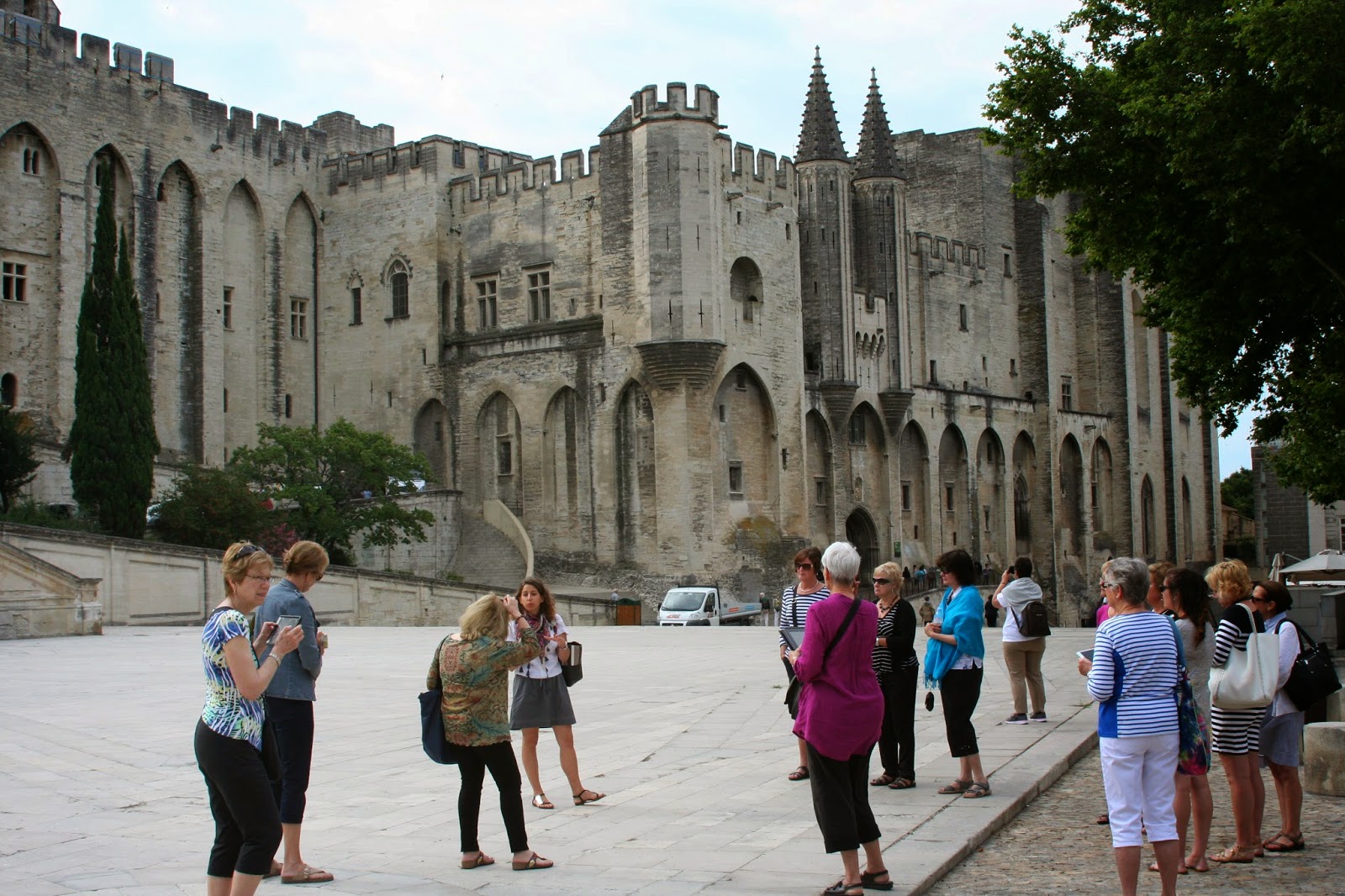 After checking in, we gathered in a private room for an aromatherapy demonstration by Claire McAlpine, from Aix. Not only is Claire a highly reputed book reviewer, but also a licensed aromatherapist. Under her guidance, essential oils were explained and tested before each of us mixed a small bottle of a personalized potion.

Day 5 ~ Take a deep breath. This was a busy day … in a very good way. We learned the intriguing history and toured the major sites of Avignon including, of course, the majestic Palais des Papes; enjoyed a private wine-tasting; visited the famed Les Halles covered market where some of us purchased delectable items for a picnic which we had on the hilltop overlooking the Rhone and famed bridge; walked to Le Jardin de La Tour restaurant for a cooking class with the charming Jean Marc Larrue. Chef Larrue was both professional and entertaining as he educated us about food quality, preparation, kitchen safety, wine, etc. 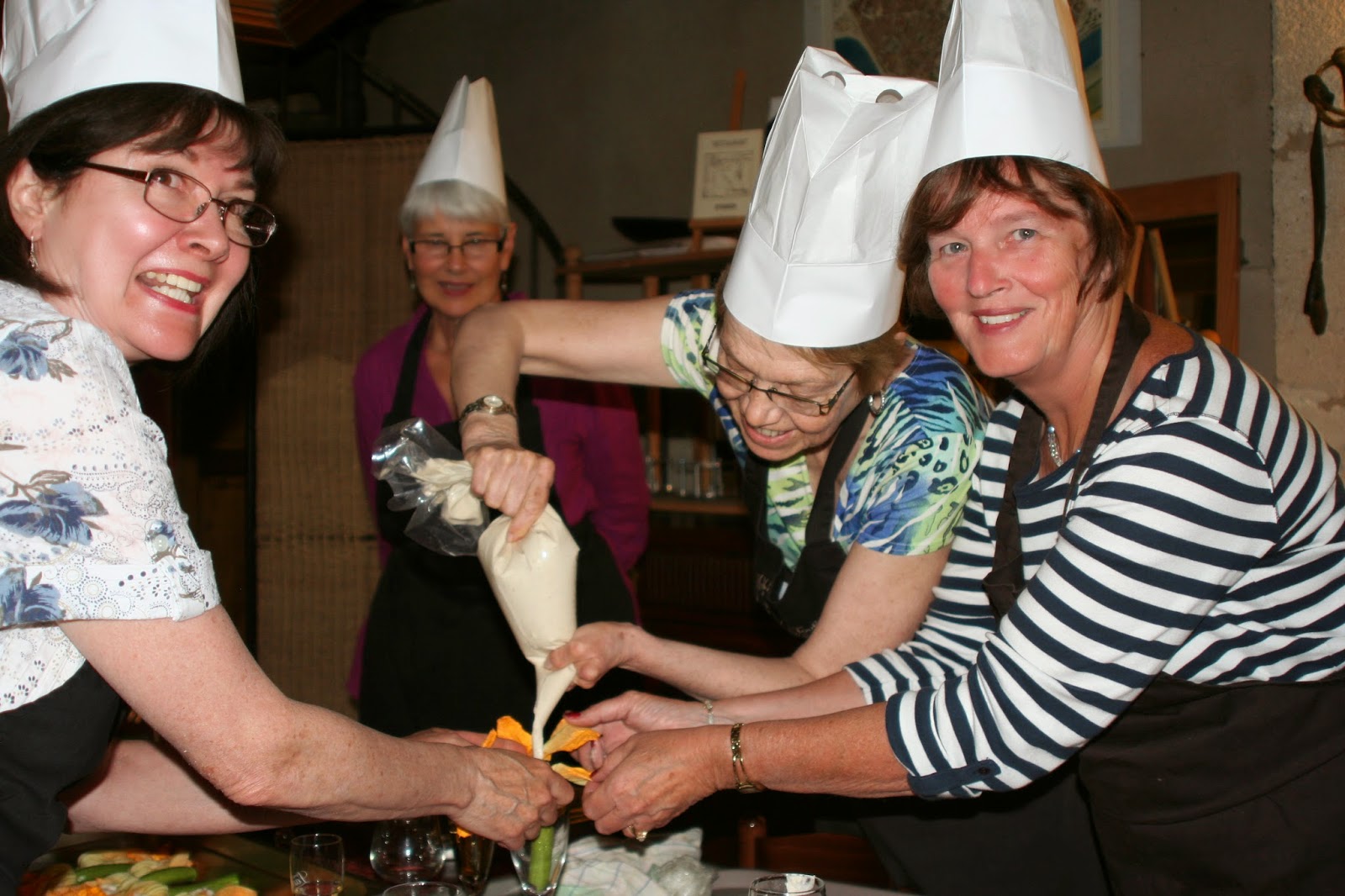 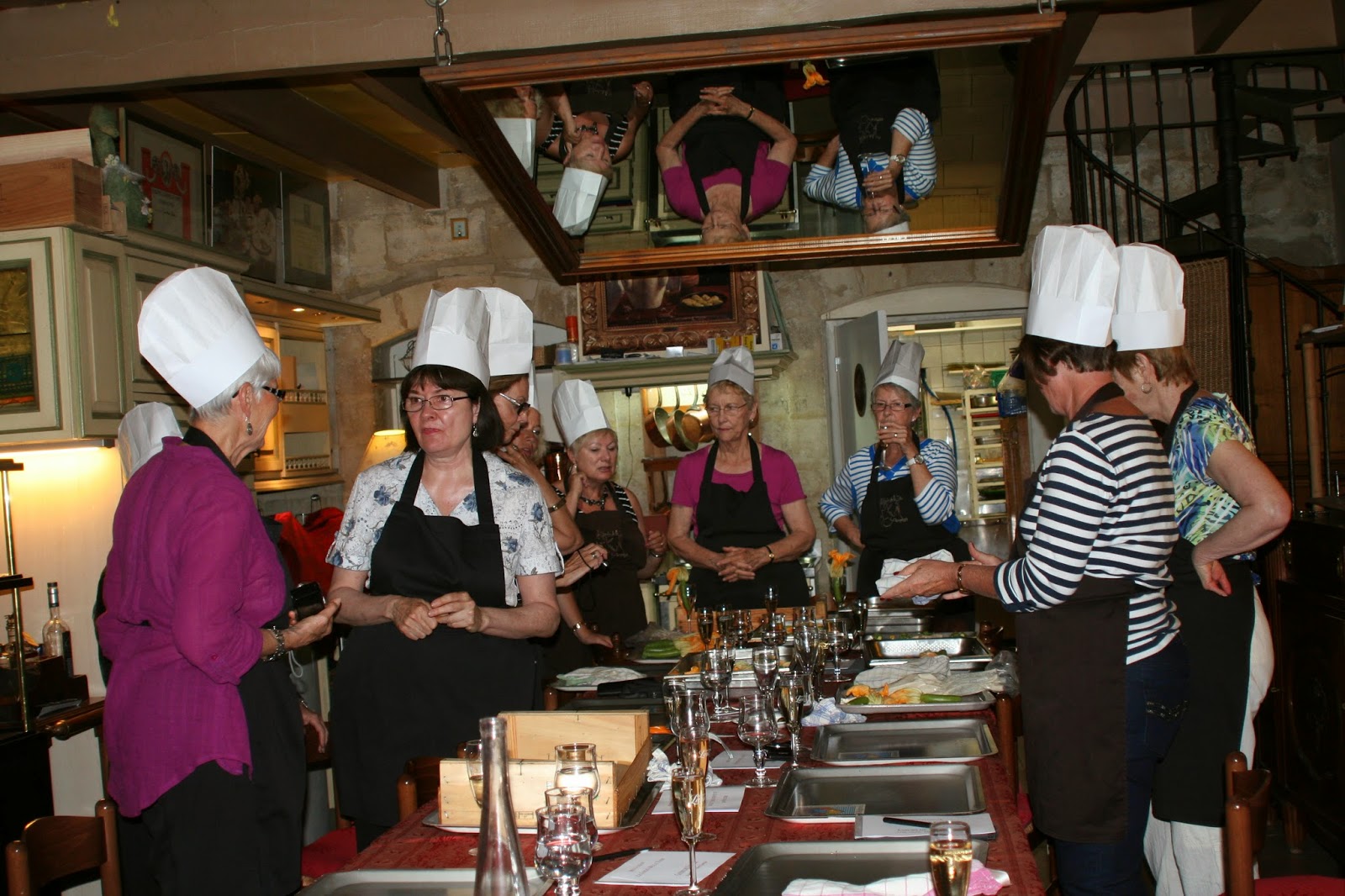 Day 6 ~ A picturesque drive (but then, where isn’t it in this part of the world?) with our first stop at the Moulin du Calanquet, a family-run olive farm and mill. As we learned about growing olives and making oil, we sampled different varieties and were treated to delicious tapenades.

Then we drove on to Les Baux de Provence for a spectacular experience that was a surprise to all of us, the Carrières de Lumiéres. This art exhibit is almost impossible to describe. Images of artists work move around this enormous ancient quarry through the use of many projectors, covering walls, floors and ceilings accompanied by appropriate selections of music from jazz through classical to pop to opera. Check out the link here and just know we were all astounded. Last year the show featured Impressionists and Provence. This year the focus was on Klimt and Vienna. Simply amazing. 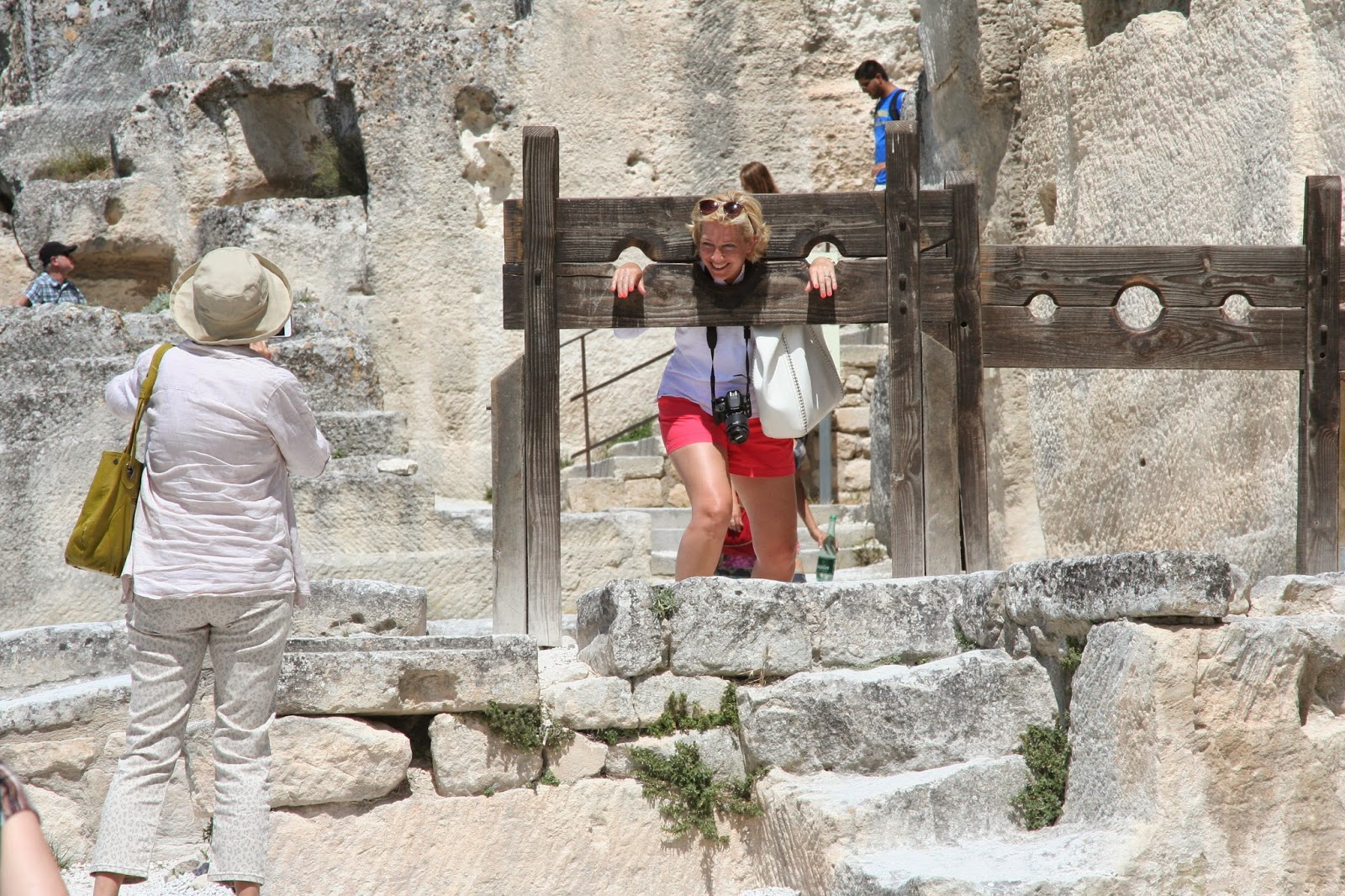 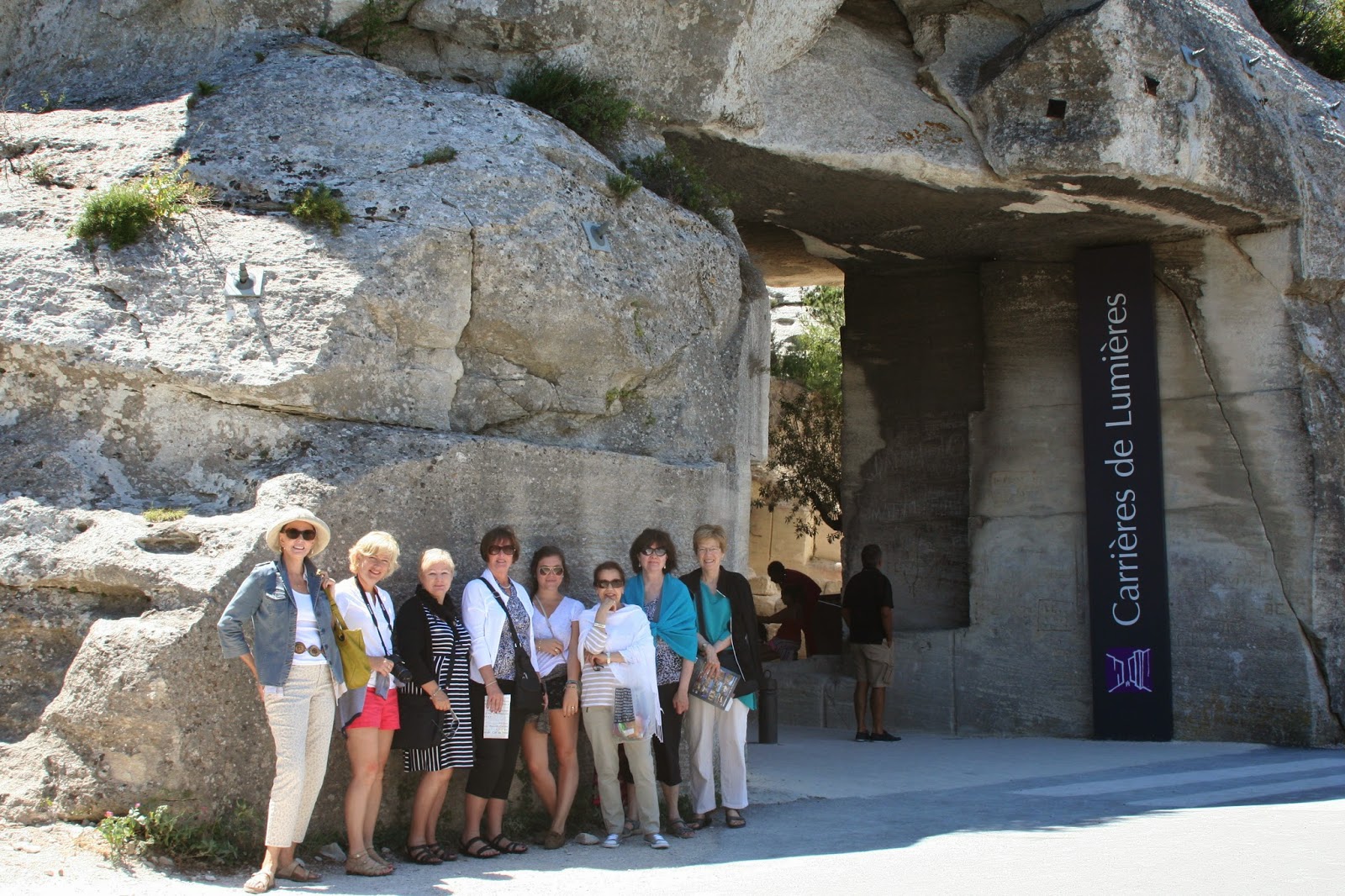 After climbing up to the village of Les Baux where some of continued on up to the castle ruins, we were back on the bus to make a stop at two Roman monuments outside St. Remy de Provence. There was time after that to spend an hour … first stop for some was the ice cream shop and for others a chilled glass of rosé or a pression on a terrace in the town square. 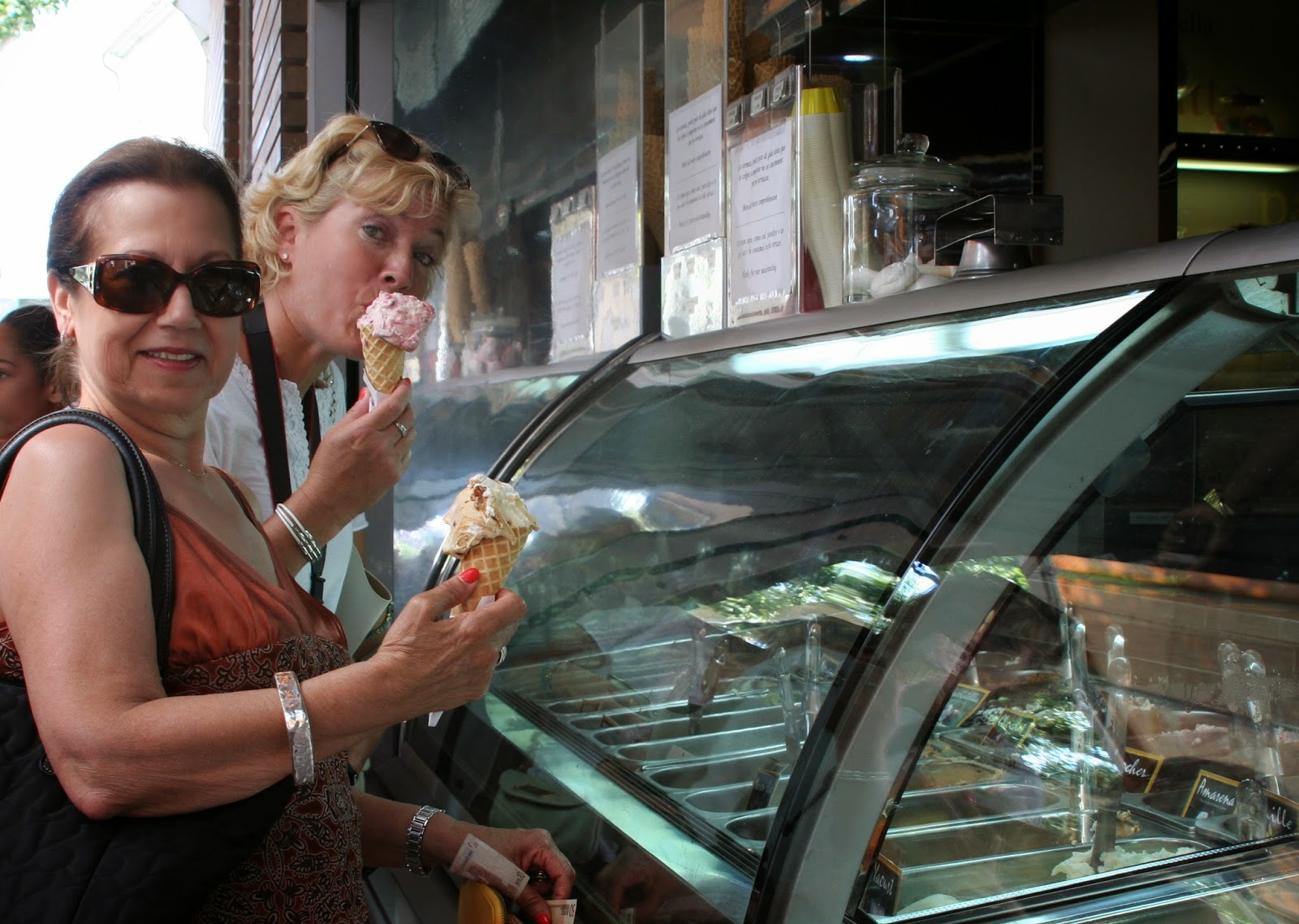 Day 7 ~ A longer drive today, just over an hour through beautiful countryside, delivered us to Arles. Our guide led us through the ancient Roman Forum and then to the ruins in the Roman Theatre before showing some of Van Gogh’s haunts in the town. Of course there was time for ice cream and a beverage of choice! We wondered if Vincent had ever sat at our table! 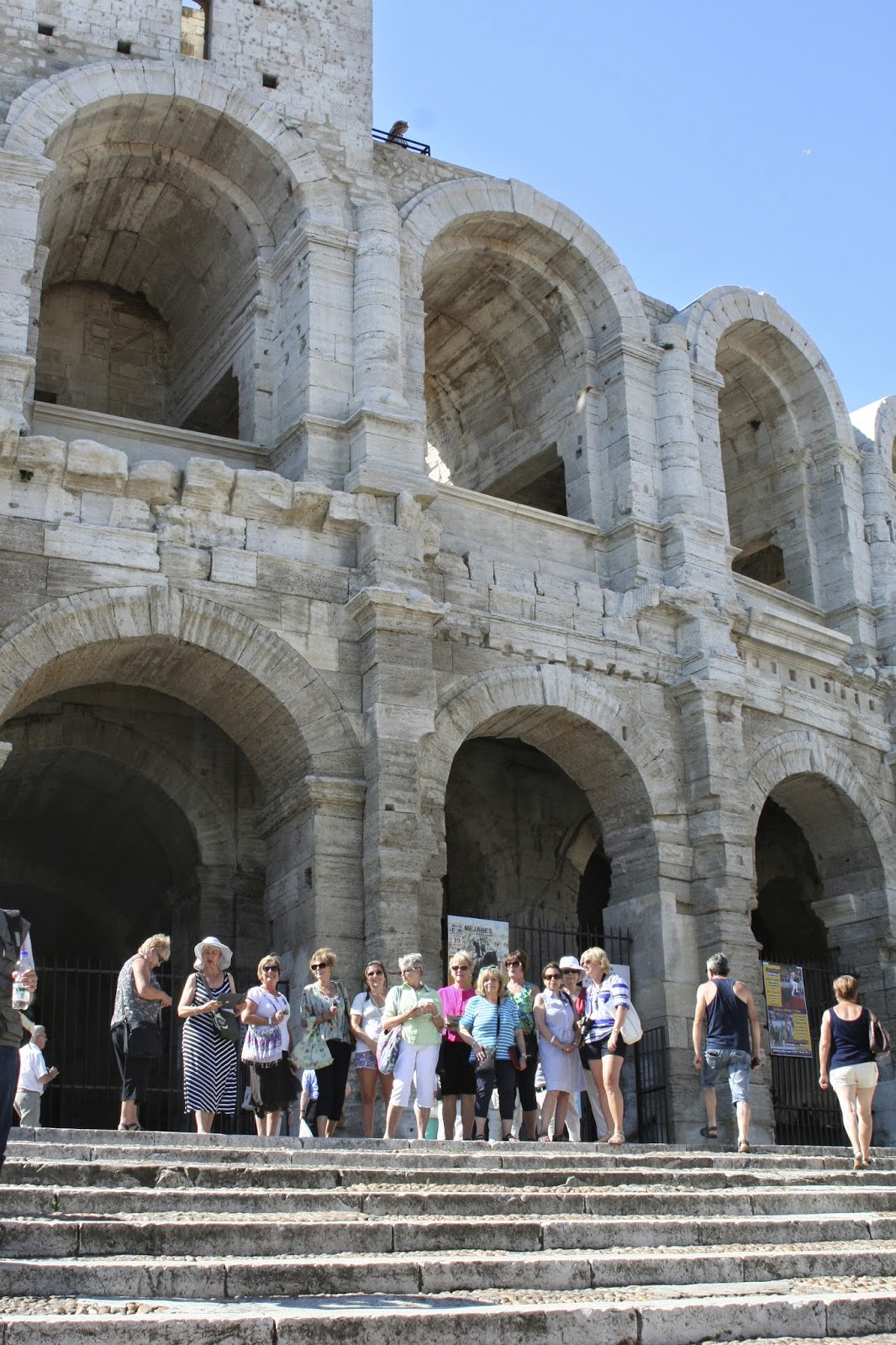 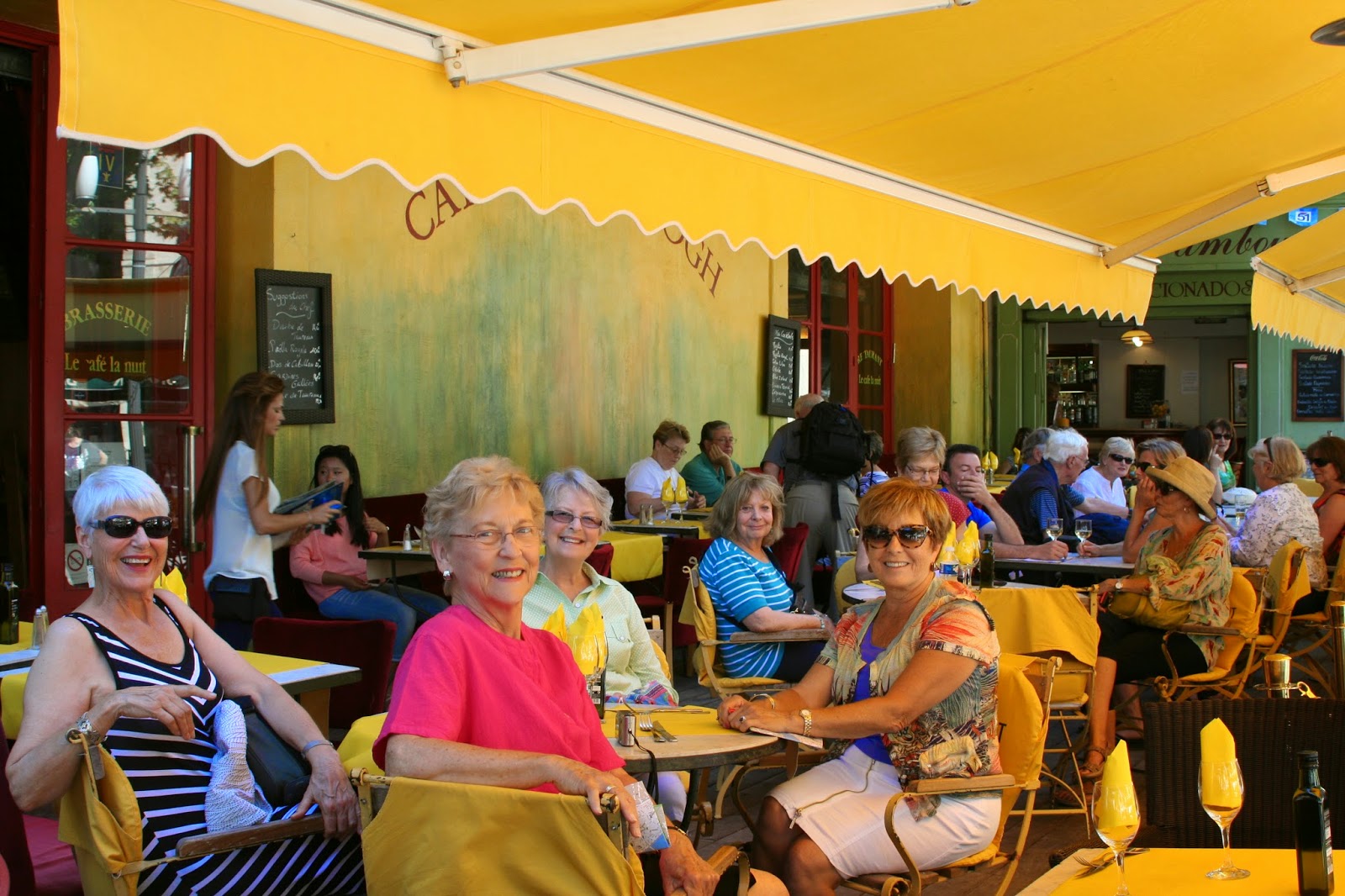 Day 8 ~ This was a special day spent exploring the Luberon area, made famous for many in Peter Mayle’s popular book, “A Year In Provence” and the setting for much of  “The Promise of Provence”. A quick stop at the Musée de Lavande, gave us an immersion on the difference between lavende and lavenderIn Bonnieus we climbed to the ancient church at the top of the village to take in the panoramic view that stretched across a patchwork of fields and farmhouses all the way to Mont Ventoux. 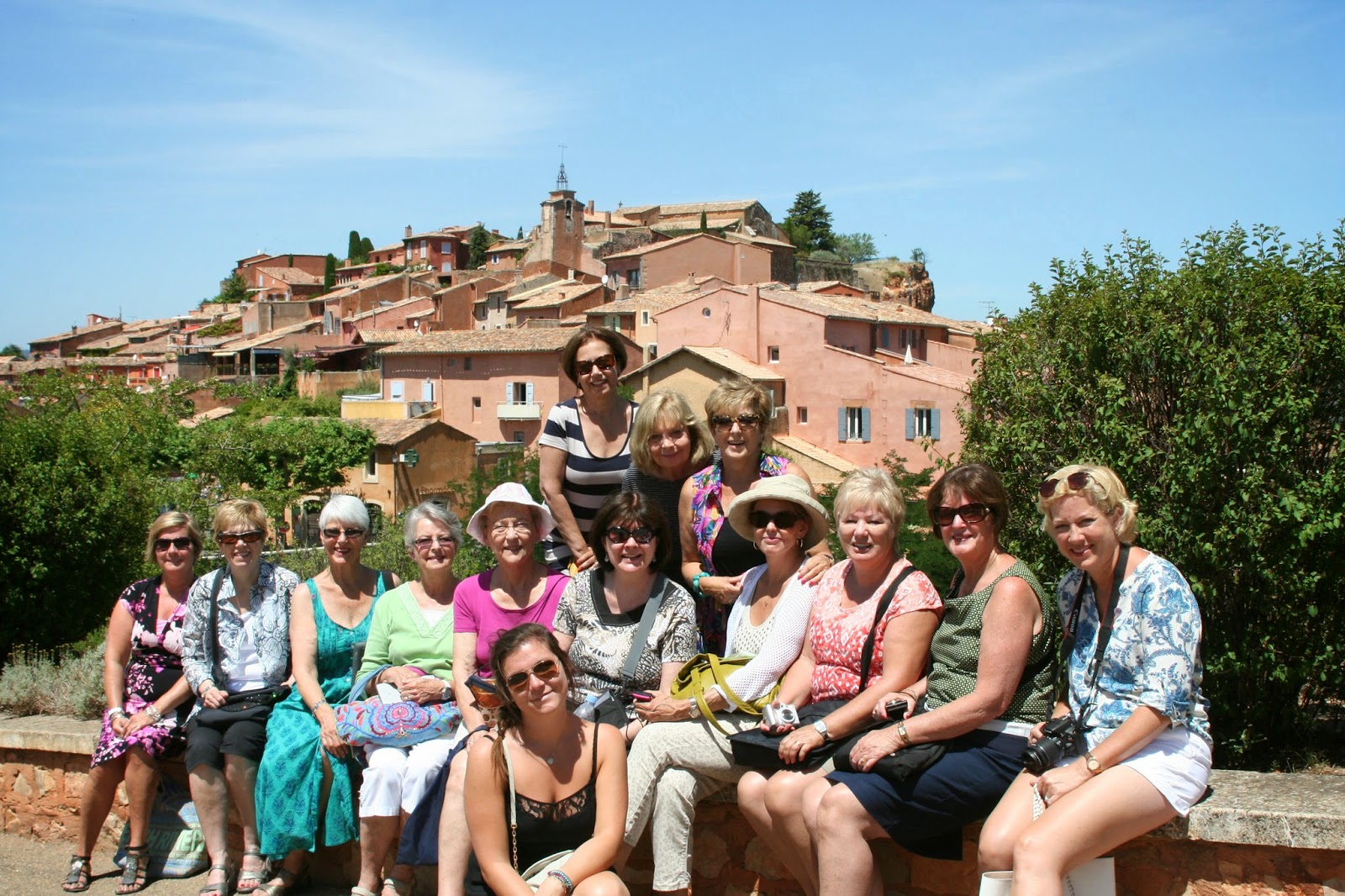 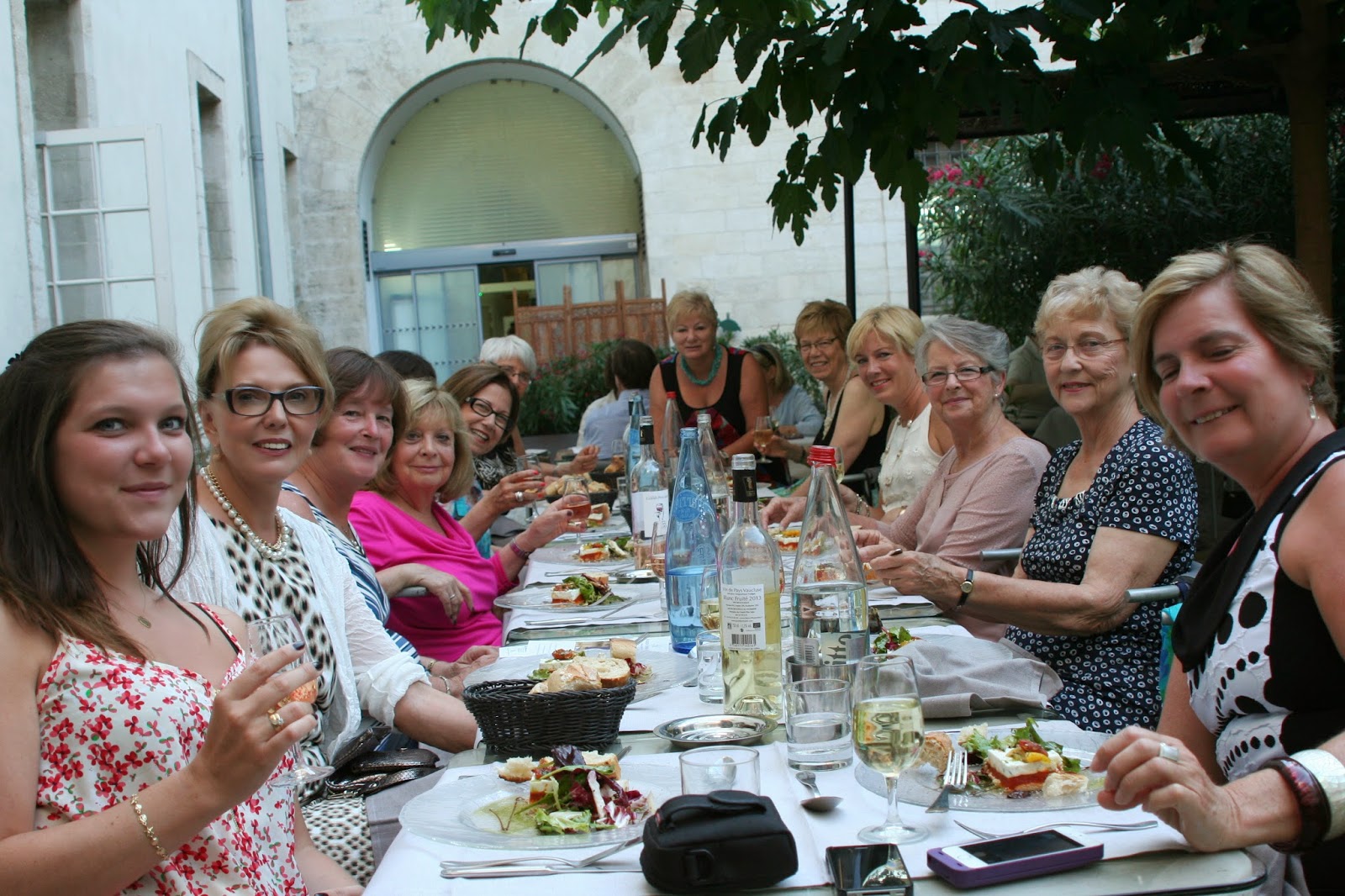 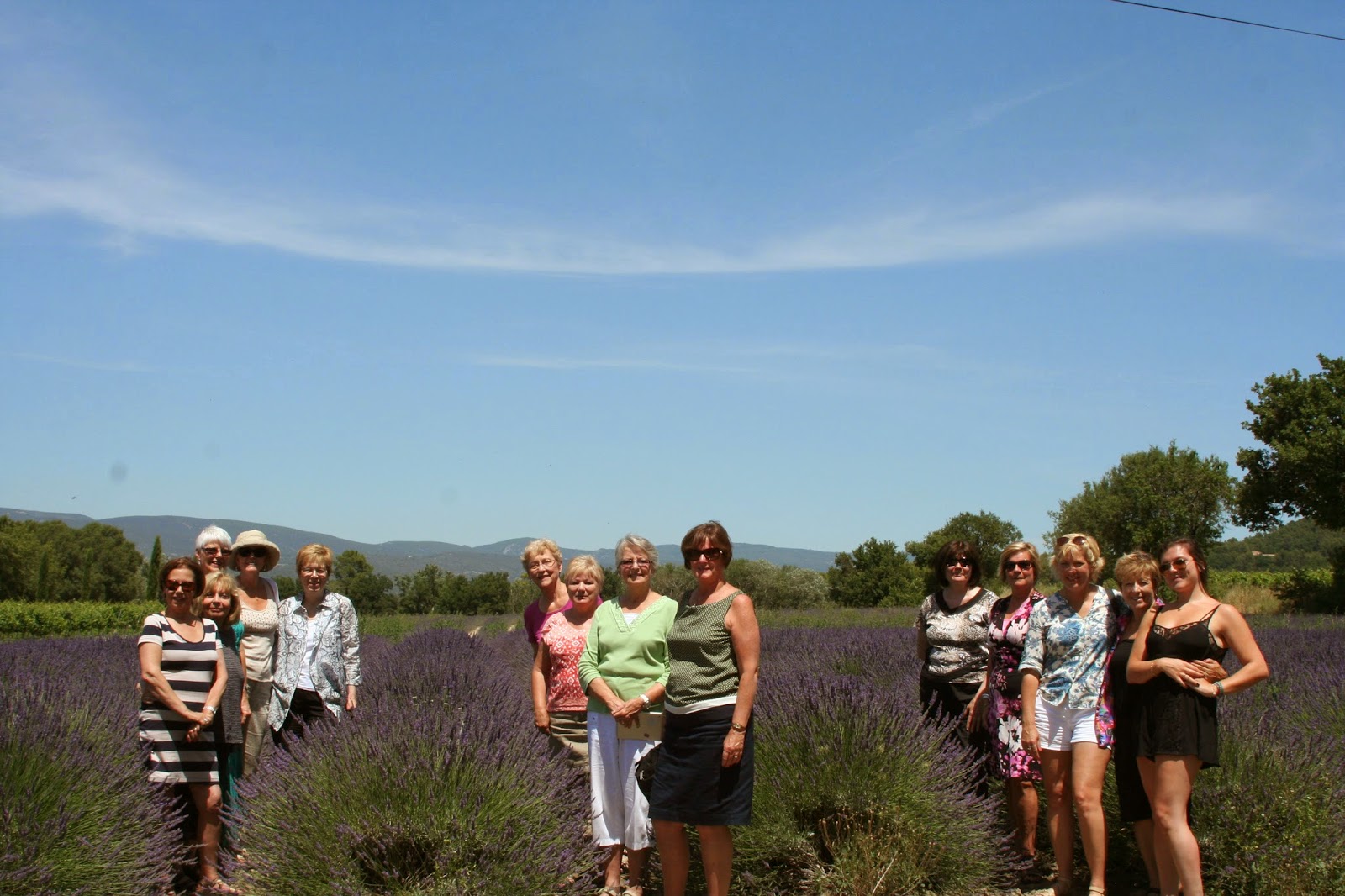 Lunch was in the colourful village of Roussillon, before we stopped at a private lavender field to get our fix of the beauty and fragrance found in this countryside from mid-June to the end of July.

Continuing on to the lavender fields of the 12thC Abbaye de Sennanque, a quick stop at the village of Gordes provided an opportunity for us to capture its stunning beauty in photos from across the gorge. 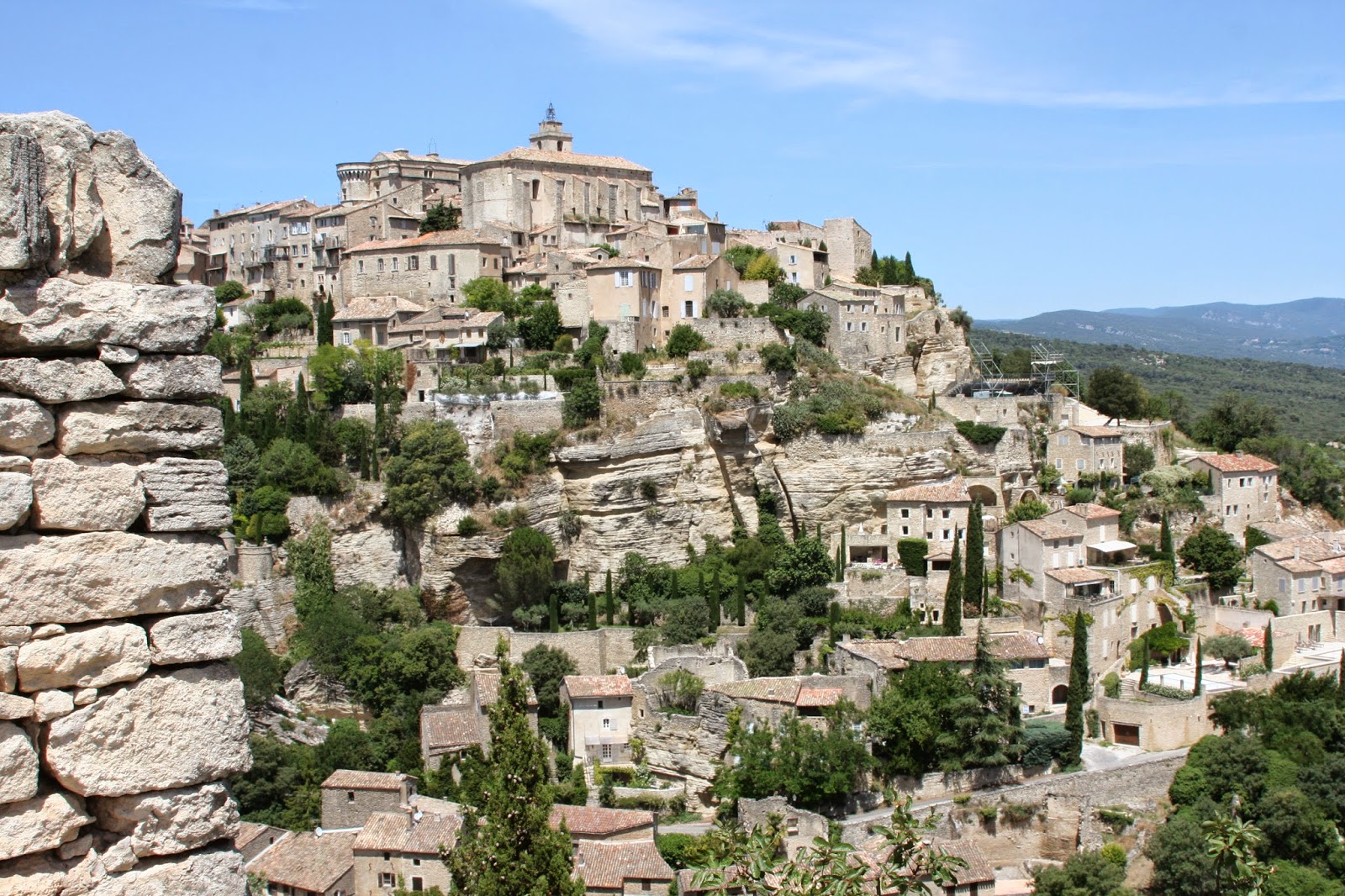 All good things must come to an end and there was unanimous agreement that this tour had been a very good thing! Thanks to a fabulous group of enthusiastic travelers ~ each sharing their unique qualities to create treasured memories for all of us!

Womens Travel Network
Debbie Ross, founder of Womens Travel Network has been providing travel services to her customers for over 25 years. With this experience she has realized the need for women to have an opportunity to travel without the single supplements or hassle of finding a travel partner.